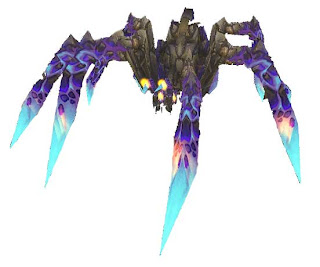 Early today, at about 12PM Server Time (US-Alexstrasza) I finally tamed Deth’Tilac. Deth’Tilac is one of the 4 new challenge tame spiders that came in Patch 4.2 located in the Molten Core (the Firelands Daily zone), but is only one of the unique skins (the other being Solix, who does share a skin with Cinderweb Spiderlings but these are not tamable). Deth’Tilac is therefore a truly unique spider as there are no others in the game with his skin.

Deth’Tilac was by far the hardest tame I’ve ever done. Every other pet that I have I’ve been able to tame by myself, but I was completely unable to solo this creature (although from what I know of his behavior it is doable for a decently geared hunter). Perhaps if I spent more time in dungeons and less time hunting rares I’d have had the gear to allow me to tame him but… I digress.
Luckily a guild mate was able to hop on his mage and help me through it. Deth’Tilac killed him and nearly died before I tamed him at less than 1% health (for him).
Here are the specifics:
Deth’Tilac has a 12 hour spawn timer, as do all of the Challenge Spiders, from what I am aware.
Deth’Tilac is immune to CC at this point. Previously he was rootable, but as of today neither myself nor my mage could CC him with any of ours. However he is slowable, so Frostbolt, Ice Trap, Concussive Shot and Scatter Shot are your friends.
Deth’Tilac has a buff on him called Molten Will which makes him immune to Tame Beast until he is at low health, about 20% in my case. This isn’t actually a problem because he is a tank and it is very hard to get his hitpoints down (but we’ll get into that later).
He also casts Aura of Deth’spair (reducing all healing you can receive by 99%), Deth Metal (increasing movement speed unless he is taking damage) and Deth Strike. Deth Strike is what you need to watch out for, it is uninterruptible, takes 2 seconds to cast and instantly kills whomever he targets. Luckily, it is a melee ability. Additionally, every time he successfully casts it, it reduces his hit points by about 10%. This is the main mechanism to bring his health down.
So the dilemma: you need to let Deth’Tilac cast Deth Strike in order to bring his health down… but it kills whoever it is cast upon. So, unless you have 8 good friends willing to die for the cause, you’ll have to have the right strategy.
Strategy:
The key here is to kite Deth’Tilac around his spawn zone, without leaving it (as he will reset). You’ll also need to have creatures upon which he can cast his Deth Strike. The best method is to have a spider pet (or four of them, there are spiders around his spawn point that you can easily tame) because they CAN CC him (I believe a Shale Spider’s CC would work as well, but I did not have one on me when he spawned). I repeat, spiders webs are the only thing I know of that will CC him completely as of right now.
The best strategy is this: kite Deth’Tilac around his spawn zone with some DoT abilities (serpent sting). Make sure you are keeping concussive shot on him at all times, and laying Ice traps to slow him down. He needs to take damage all the time or his Deth Metal ability will activate, making him move much faster. Snake Traps and Immolation traps are good, remember the damage dealt is just to keep him slowed down, not to get his health down.
He’ll do that on his own. You’ll need to sacrifice your pet for him to use his Deth Strike on, at least 8 times (less if you do a lot of damage). This will make it tricky as even if you have 4 pets with you, you’ll have to resurrect each pet at least once.
The best time to resurrect is after the following sequence: Hit him with concussive shot and scatter shot, Launch an Ice Trap in his path. Disengage and begin to raise your spider. You should have just enough time to get your spider up, have your spider web him, and get away from him as he casts Deth Strike on your spider. Rinse and repeat.
At 20% health, you’ll need to dismiss your pet, Concussive shot and Scatter schot him, Ice trap him and get at max distance. Cast Tame beast (Deterrence doesn’t work on his Deth Strike) and hopefully you should have enough time to tame him.
It may be worth it to hire someone to help you, if you cannot find someone. A mage would be best, but anyone who can slow him down at range. Just be sure to tell them to stop when he gets to 20% health, and he’ll need to have aggro on YOU during the whole Taming Process.
VIDEO (not my own, I was on my laptop at the time and couldn’t record)
LINKS:
WoWHead Page
Petopia Page
Liked it? Take a second to support TPK Media on Patreon!

A Note on the Non-Unique Challenge Tames