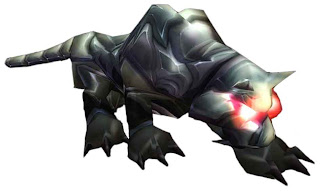 Today must be my lucky day! (See a Video of me helping a friend below)

Earlier today I tamed Deth’Tilac. I’d been camping for Karkin and decided to check Deth’s spawn point and lo and behold I tamed him. I went back to my old camping spot, and started writing the Deth post, when my NPCscan goes off. Tabbing back into WoW I see an Orc Hunter running around with Karkin as his pet. Bad form dude, but whatever. Well I thought, he must have just tamed him, so it’ll be another 12 hours. I logged off and continued to write.

About two hours later (roughly 6:55PM Server Time) I decided to log back on and see if any of the rares were up (I have everything from Molten Front except for Karkin, but I know a few hunters out there looking for rares) and NPCscan goes off. It was Karkin! I clicked on it and sure enough I saw the Silver Dragon. Unfortunately he was on the “bad” spawn point. More of that later. So I hopped over and tamed him, easy as could be.

Karkin and Skarr share the same spawn location and same taming tactics, so I had already done my trial and error on Skarr. You MUST be MM spec for this tame. Only one of them will be up at any given time, and it is supposed to be 12 hours before another spawns after being tamed/killed. They are each equally as likely to spawn in one of the two spots, so you have a 50% chance of getting either Skarr or Karkin and a 50% chance of them spawning in either location. Not bad odds if you ask me, you should be able to grab both of them if you’re willing to spend the time.

SKARR AND KARKIN TAMING GUIDE
Getting over there: (See Map)
Skarr and Karkin both spawn in the Fireplume Peak, the North Western area of the Molten Front, the Firelands questing zone introduced in Patch 4.2. You must be in the right phase to enter the zone.
In order to reach Both Skarr and Karkin you’ll have to make it over to Fireplume Peak. This is a bit tricky, as the easiest access point is blocked by flame (at least at the phase in which I am).
The easiest method, in my book, will require a big sacrifice. You’re going to have to die. So repare, then run up north to Ragnaros’ Reach. In the Upper Left corner of that area is a spot where you can jump over to get on the other side of the wall. Next, you’ll have to die. Get to the point where you’re facing Fireplume Peak. Then run off the cliff. You should die underneath the Peak about in it’s center. If all goes well, you’ll spawn at the spirit healer and it’ll let you resurrect, without rez sickness. See my video of the approach at the end.
Now you’re at Fireplume Peak. Skarr and Karkin share two spawn points. Their re-spawn timer is supposed to be 12 hours static, but I think it may fluctuate between 6 and 12. Regardless, you can camp between the two spawn points on Fireplume Peak and if they spawn you’ll be in range for NPCscan to go off.

The Tame
Both creatures have same set of abilities. During the cast they’ll cast two abilities: Fieroclast Barrage and Fireball. Fireball is relatively safe, but Feirclast Barrage will interrupt your tame, regardless of Deterrence, and will two shot you easily.
Additionally, they will only cast it after you have cast Tame Beast. Therefore:
1) Cast Tame Beast
2) as they cast Fieroclast Barrage, hit escape (to cancel the tame) and cast Silencing Shot.
3) cast your Deterrence/Tame Beast Macro.
And you’re done. This is a relatively simple tame, considering it’s a bit hard to get to the area. Additionally, one of the spawn locations requires you to hop on some of the hopping platforms to the south of Fireplume Peak, as you won’t have LOS from your camping position.

About the Spawn Locations:

Both Karkin and Skarr share the same spawn timer and the same Spawn Locations. One is quite easy to tame, the other requires a little bit of maneuvering, as you can see below: 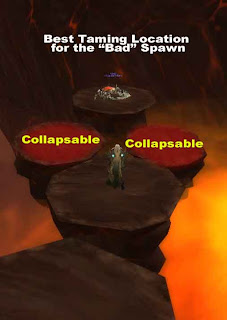 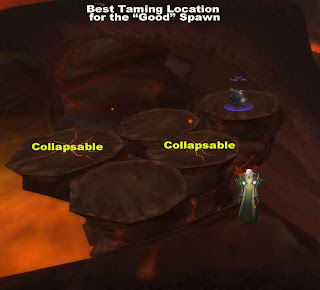 As you can see, the “good” spawn location is quite easy. it is located directly ahead of the spirit healer. The “bad” spawn location is quite tricky, you’ll need to hop on some of the stones in order to have Line of Sight in order to tame. If they spawn at the “bad” spawn, it may be easiest to mount up and run/jump over to the other ledge, across the chasm with the jumping stones. Here’s the view from that side: 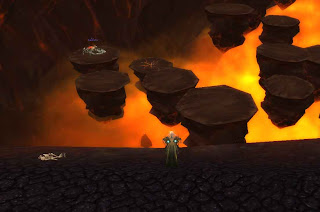 If you don’t want to risk dying, you can try to hop your way down the stones until you have LOS. Here’s the best path (beware, some stones collapse on you). 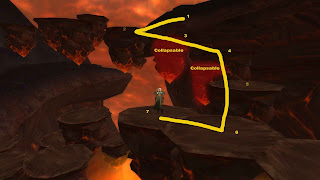 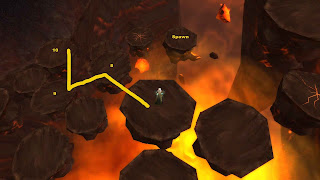 As you can see, its far easier to just mount jump your way over to the ridge on the right. From there, it’s only 1 jump away from a platform that is in range to tame.
A video of the easy way to get to Fireplume Peak. The other method is to run through the band of fire as mentioned above.
VIDEO:
This is a video of me helping a friend (actually I spammed in trade that it was up and he was the first to PM me) tame Skarr. Method is the same for Karkin
LINKS: Skarr
Petopia Page
WoWhead Page
LINKS: Karkin
Petopia Page
WoWhead Page
Liked it? Take a second to support TPK Media on Patreon!