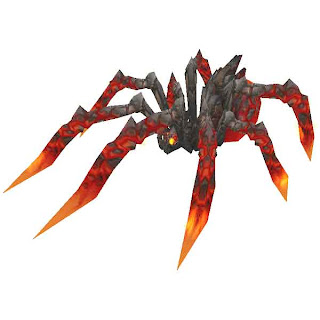 Skitterflame is one of the new, yet Non-Unique Challenge tames added in Patch 4.2.  Please read my thoughts on these three Spiders, Skitterflame, Kirix and Anthriss here.

Skitteflame shares his skin with Cinderweb Spinners. This makes him somewhat less special than he otherwise would have been. Cinderweb Spinners spawn between the Forlorn Spire and The Widow’s Clutch and are far easier to tame than Skitterflame (although he is probably the easiest of the Challenge Tames to grab). They have a 50% chance to spawn each day, so if you don’t see them today, try again tomorrow. As I’ve previously said, these tames offer little prestige value to the outside community, as anyone could grab the Cinderweb Spinners and say they’d tamed Skitterflame. However, if you want to test your skills…

Getting to Skitterflame requires you hop over to Fireplume Peak. Here is the map of his location in the Molten Front:

As I’ve written previously, the easiest method (or perhaps quickest) is to follow the path in this Video:

Simply jump off the cliff as you’ll see in the Map and video. You should spawn at the Spirit Healer and be able to resurrect right there. From there, walk around the south side of Fireplume Peak and you should get to Skitterflame’s Spawn Location. He has about a 12 hours spawn timer. Skitterflame sits in a lava pool and does not pat. He’s quite hard to get to so often times you will find him there on your first attempt. 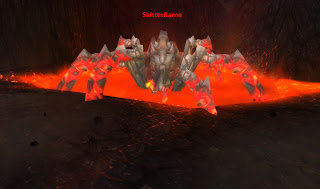 Skitterflame is quite easy to tame, for a “Challenge” tame. He operates on an energy bar, similar to Solix. If he reaches 0 energy, he will die. He is also immune to Tame Beast until his energy drops below 20. His main ability is Pyroclastic Charge, a knockback ability similar to Solix’s. He does not, however, 1 shot you.

The best method, is first to clear the area of all mobs so that they won’t interrupt your tame. Now here’s the tricky part. You will be casting Freezing Trap on him. When he is frozen he gains the debuff Cooling Down. As long as he is frozen, his energy drops. Once the trap breaks his energy stops dropping.

Hit Skitterflame with a Distracting Shot (I believe he is immune to Concussive, but it doesn’t matter for this tame). Make sure you’ve got a Freezing Trap laid down for him. he will freeze. Get at max range and cast another Freezing trap as it is up. Keep kiting him until he is trapped again. Rinse and Repeat. Once his energy drops below 20 he will become tamable. If he is trapped HE MUST BE AGGRO’D so that his energy will not drop below 0, as it does so quite quickly.

I found that it took only 2 traps to make him tamable. Remember to use his

VIDEO: (Again, these are not my videos, just the best ones I’ve found on Youtube)