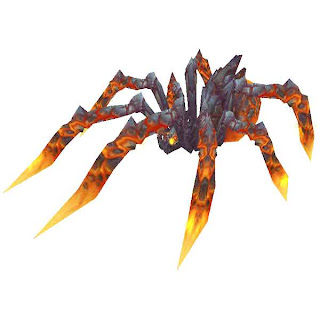 Solix is one of the new Challenge Tame Spiders added in Patch 4.2. He and Deth’Tilac are the only two unique spiders of the lot, as Kirix, Skitterflame and Anthriss all share skins with common spiders in the area. Solix actually shares a skin with Cinderweb Spiderling, but these are not tamable. So Solix is the only way you’ll get a pet with this skin. And he’s a tough one.

Solix appears to have a 7 to 12 hour spawn time, and will always spawn in the same location.

Solix spawns in the Molten Front, the new Firelands daily quest location, so you’ll need to be in the proper phase to reach it. Once you’re there you can stop questing. Solix is located on the right side of the map (see below) in a cave called Igneous Depths. If he’s up your NPCscan will go off well before you’ve reached the cave.

Once in the cave you’ll see he sits in a lava bath. He has a buff on him called Blazing Speed, which increases his attack speed by 1000%, movement speed by 100%, and makes him untamable until his energy drops to about 20%. So like Deth’Tilac and Skitterflame, he must be kited. However, when his energy gets to 0, he dies.

This is a tame where you MUST use your hotkeys. What I use (as I still use W to move forward) is I had Cuncussive Shot in the #2 action bar slot, and I have the following macro written:

set for Shift+E, but whatever works best for you. The issue with this macro is that you’ll have to hit your hotkey twice.

Some suggest putting Aspect of the Pack/Cheetah on for increased run speed, as you’re dead in one shot if he melee’s you anyway. I didn’t do this because I was worried about the flames hitting me and slowing me down (the lava pits will shoot some fire up at you from time to time) but you might try it if you need a little more space between you.

The best method is as follows:

Lay down an Ice trap right in front of the Lava Pool. Open with Scatter Shot/Concussive Shot and immediately run from him. Watch the timer on the Concussive Shot as you’ll need to quickly turn (hence using the mouse rather than A/D keys) and fire another Concussive shot (hence the hotkey) and lay your traps down as soon as you can.

Once his energy bar reaches 20% his buff should go off. You must then Concussive Shot (and Scatter shot if it’s up) and launch your Ice Trap, get at max distance (via Disengage) and begin the tame ASAP as his energy goes down fast. No need to pop Deterrence as his hits ignore it.

If you’ve got someone helping you, a mage would be nice for chill effects, and another hunter with a spider or shale spider would be fantastic for additional CC. He’s immune to Freezing Trap and all other CC’s (other than the slowing ones).

There you have it. Hopefully with a little practice you should have a very unique pet. Took me two tries, and he nearly died the 2nd try.

VIDEO: This is a great Video from Deadly Slob on how to tame.

World of Waitcraft: The most anticipated disaster of the year.